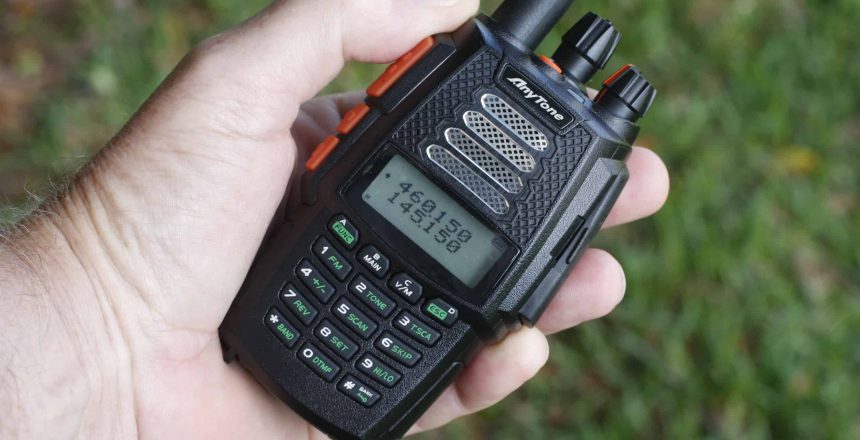 The AnyTone TERMN-8R handheld two-way radio has the potential to be one of the most useful radios ever made for preppers. The only problem is that you can’t buy one due to issues with the Federal Communications Commission (FCC.) See more on that below. I did get to examine one of the few in the US for this review.

The radio has many abilities. It transmits and receives amateur, business and public safety VHF and UHF frequencies along with GMRS and MURS channels. You can listen to FM and AM broadcast, NOAA weather, aircraft, and shortwave, though it lacks sideband for shortwave amateur. There are three power setting, but the manual doesn’t specify what they are.

There are a multitude of signaling options which could be very helpful in a group setting. It can identify itself to other radios in the system and send and receive tone codes for selective calling or controlling other equipment.

I couldn’t test the most exciting feature to me, frequency hopping, since I only had one radio. A group of TERMN-8R’s can be programmed to rapidly hop through a series of frequencies in unison. A radio without the proper programming will be unable to follow a conversation. This technology could offer a powerful security advantage to a prepper group. The frequency hopping is on amateur UHF frequencies, so range will be short, though one could connect it to a high gain elevated antenna for better performance.

It is a complex piece of gear and you need to read the manual to get it up and running. To make full use of all the features, you will have to keep the book close for a while.

The radio includes a flexible antenna, desktop charger, earbud, manual, belt clip and a generous capacity 2,200 mAh battery. One feature I really liked is the charging port for a 12 volt car cord for mobile use. The antenna uses a female SMA connector so it is easy to connect an external antenna for improved range. There is a port for a speaker mike. The ports have covers to keep moisture and dirt out, but if I were in a nasty environment, I would tape them over them to be sure.

The build quality seems solid, but not quite up to the Icom commercial radios I usually use. The compact shape fits the hand well and the push to talk falls nicely under the thumb. The controls worked well, but I would have liked more resistance on the channel selector knob which I found too easy to turn. The speaker and microphone both produced decent audio. I didn’t like the orange trim and might hit it with some spray paint if it were my radio.

The radio can be programmed from the keypad or with the provided Windows software using a computer. The computer is far easier. The software download, when extracted, had an empty folder labeled for Mac software, so Mac users may be out of luck. The software is logically arranged and worked quickly and well using a Baofeng programing cable.

Due to the legal issues, I only made a few test transmissions on frequencies I was sure would not interfere with others and on amateur channels. I don’t have a service monitor, so this was testing by ear. VHF/UHF performance seemed to match or surpass a Baofeng UV-82.

Shortwave is usable, but not up to the CountyComm or C. Crane radios we recently reviewed. It lacks single sideband which makes listening to amateurs difficult. I didn’t hear much with it on aircraft, but I am not close to a tower.

It can do cross band repeating, something useful for amateurs. What the radio hears on one frequency will be retransmitted on a frequency on the other band. Amateurs often use this capability to extend range. You could locate one of these radios at the top of a hill and everyone in your group could transmit on UHF and their traffic will be rebroadcast on VHF. Anyone within range of the cross band repeater could, therefore, talk to anyone else in range of it by setting their radios appropriately.

David Pruett of AMP-3.net had the brilliant idea of putting a cross band repeater on a drone. David is an avid amateur operator, emergency doc and preparedness guy who did the Survival Communications video sold here at The Summit. Since UHF/VHF is line of sight communications, this would greatly extend range. As an example, at 400 feet, the maximum altitude above ground the Federal Aviation Administration (FAA) allows model aircraft, anyone within 30 miles or so of the drone could talk to anyone else within 30 miles. In an emergency it might be acceptable to go higher. At 1,000 feet, range could go beyond 40 miles. While trees and structures can block or weaken signals, curtailing range, this is a powerful communications tool. Drones have limited flight times, but one could set up a schedule of when it would fly and distribute it to those you wish to stay in contact with. Another option with more staying power would be a tethered balloon, if one has a way to keep it balloon inflated with enough helium or hydrogen to lift the radio. Again, the FAA has altitude restrictions, but one could probably exceed those in an emergency.

This is a neat piece of kit, but we have to talk about the law. Where AnyTone had trouble was in trying to make one radio that can legally be used in three different services governed by different rules. Part 90 rules cover business and public safety radios, Part 95 is for GMRS and MURS while Part 97 handles amateur. The FCC thankfully has these rules in place to keep people from interfering with each other.

Key factors in what can be used in each service are transmission modes and power plus the FCC frowns strongly on radios that can be programmed from a keypad by users in the field to non-amateur frequencies.

AnyTone appears to have attempted to solve this by forcing you to boot the radio in different modes for each service so it can only be used in one at a time. The GMRS and MURS modes disable the ability to enter frequencies by keypad while the Normal mode allows it. The problems begin with the rule that MURS radios may not be usable on other frequencies. Next, the AnyTone I used could be programmed to exceed power limits for MURS and FRS as well as transmit with the wrong bandwidth on those channels. Further, FRS radios may not have removable antennas and this one does. Finally, if you boot the radio I tried in the Normal mode, you can enter frequencies for FRS, GMRS, MURS, and business and public safety channels via the keypad. These issues were sufficient cause for the FCC to deny certification. That’s a shame as this radio offers a lot, especially to preppers.

AnyTone’s web page implies the radios are coming back soon and we hope they succeed in revising it so that the FCC can accept it. I tried several times to find out what AnyTone is doing, but they did not answer my emails. They do not list a phone number or address and aren’t in the phone book, so email was the only means to reach them.

And yes, there are tons of radios out there that can do all these things, but I can’t find any that are properly certified. One wonders if the FCC is going to notice and shut down the party. AnyTone appears to have tried to do this right while everyone else is simply selling radios and not worrying about asking permission. Let’s hope this works out and we can buy these radios. While any radio can be used on any frequency in an emergency, the AnyTone would be great to use in normal times too.