An Opening Battle in an Unending War 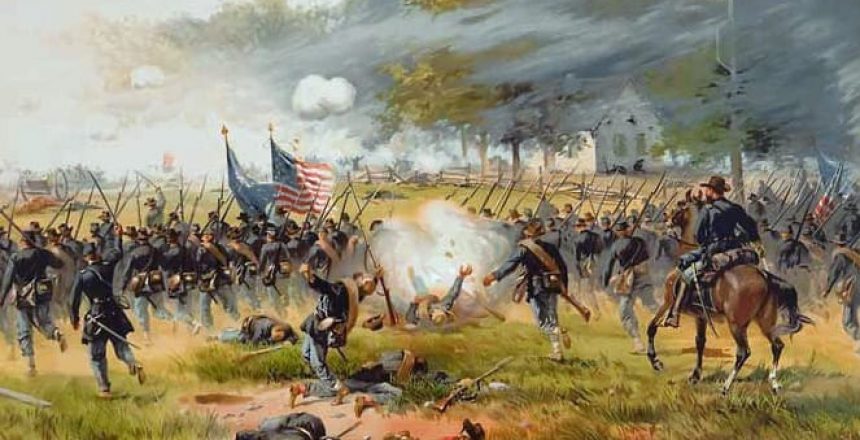 Painting of the Battle of Antietam by Thure de Thulstrup, public domain courtesy of Wikipedia

I am, admittedly, a glass half empty sort of guy, but I did take a few moments last week to celebrate the defeat of one of the most corrupt and venal candidates to ever run for the presidency. That said I remain uncertain of the man I voted for. I hope for the best, but don’t know if he truly has the convictions and talents needed to save the republic. Then there is the question of will his own party support him at governing any better than it did in the election. Nonetheless, it at least feels like my side is finally back in the fight after essentially surrendering for eight years.

We must realize, however, that he lost the popular vote which means there are more of them than there are of us. They are answering their loss in the Electoral College with riots, threats of murder and assaults against supporters of Trump. We must therefore ask whether the two halves of the United States can exist together. The last time this country was so divided was 1860. The time before that was 1775. The events of both years led to horrendous and bloody wars.

The issue, in simple terms, is whether the United States can remain a nation with borders and devoted to the concept that men “are endowed by their creator with certain unalienable Rights” or if our rights and property are determined by whatever a majority feels like giving us at any moment in one huge globalist society ruled by elites who know what is best for us. Do we prefer limited government that prevents the “tyranny of the majority” or should we allow a majority to live off of a minority of producers?

Some on the left are already answering the question of one nation or two (or three or more) with the Calexit movement pushing California to secede from the United States and the beginning of a similar drive in Oregon. Oddly, our side, castigated as violent, racist, homophobic, phobicphobic whitelash anachronisms did nothing of the sort in 2008 or 2012. Nor did we riot and assault the supporters of Obama.

It is hard to tell if the left can take California and Oregon out of the union, but judging by the votes in those places, there may be serious support for the notion. In 1860, it took over a month after the election for South Carolina to secede and another two months for the next six states to go out. The remaining four members of the Confederacy waited until after the war began at Ft. Sumter and Lincoln promised an invasion of the South to recover federal property. General Winfield Scott had offered Lincoln options, among them a long and desolating war or that “wayward sisters depart in peace.” Lincoln chose to invade Virginia. More than 600,000 dead later, more than all other American wars combined, he had his way.

Our current conflict is a result of the left’s efforts to divide and conquer by pitting group against group through false concepts that promote diversity rather than unity while bringing in immigrants who do not buy into the concept of the United States.

Today, secession is not tainted with the stain of slavery. It is, instead, a matter of should those who do not wish to associate be forced to do so. I say no. If the left wishes to go, let them. Retaining them by force is unacceptable. The problem is how to divide things up. A look at the electoral map shows that this is largely an urban vs. suburban/rural issue. In most states, the majority of the geography voted red. That geography, however, has fewer votes than the urban blue regions. Jefferson warned that “When we get piled upon one another in large cities, as in Europe, we shall become as corrupt as Europe.”

Living in cities removes one from the land, the source of sustenance. The farther removed from where our food comes from, the less we understand the cycle of life. Divorcing ourselves from that cycle leads to falsehoods and dependency on others. The lack of self-sufficiency is a true curse.

In 1985, it was unthinkable that the Soviet Union would collapse and break apart. In much of 2016, it was unthinkable that Trump would be the president-elect. Should the unthinkable occur and states secede from the union, what does that mean for us? Even if none of the secession movements succeed, there are many calling for violence. What if they succeed and Trump is murdered? How far will his opponents go to prevent his success? The world economy is finely balanced on debt. Do his opponents have the means to tip it in a way to blame him for a crisis?

If we have to divide up, it will be messy, far messier than the regional conflict of 1861. Find a map that shows how the counties voted in the last few elections to get an idea of the scope of the problem. There are no clean lines of demarcation. Breaking apart without clear lines is frightening.

All this means uncertainty. It obviously means being ready to deal with disruption and crisis. We are not out of the woods despite what looks like a victory. To steal a line, it ain’t over till it’s over and it sure isn’t over. It is just the beginning of another stage. Be ready, for your sake and your family’s’ sake. This is not a time for complacency. The struggle for freedom is an unending battle.

After writing this, the New York Times published a fascinating piece on The Two Americas that is worth checking out. The map is especially worth a look as it shows just how hard it would be to separate the two.

6 thoughts on “An Opening Battle in an Unending War”