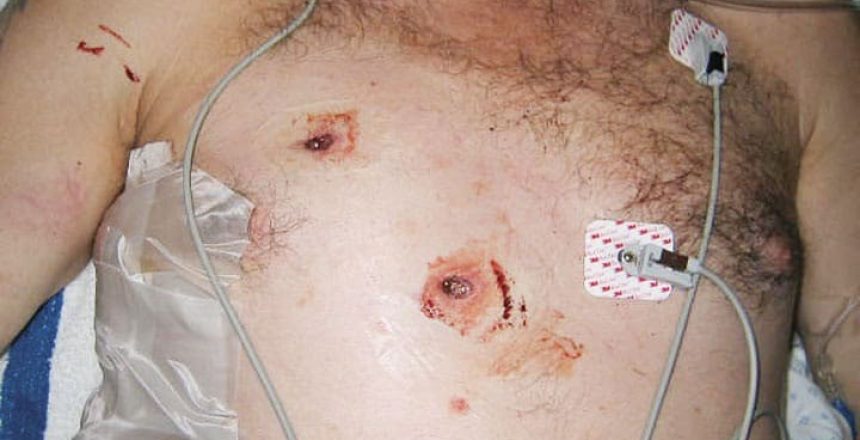 Editor’s note: The following article is from PoliceMag.com, and illustrates with great detail, why you would want to choose a 9mm over a .40 caliber.  As someone who has used a .40 for a long time (I also shoot many other calibers), it was an eye opener.  I can safely say that this article has help persuade me towards carrying a 9mm – because when your fear for your life, and .40 may not stop the threat.

After you’ve read the article, please feel free to leave your comments below.

The FBI’s decision to switch back to 9mm pistols and ammo is based on studies of wound ballistics and shooter performance. 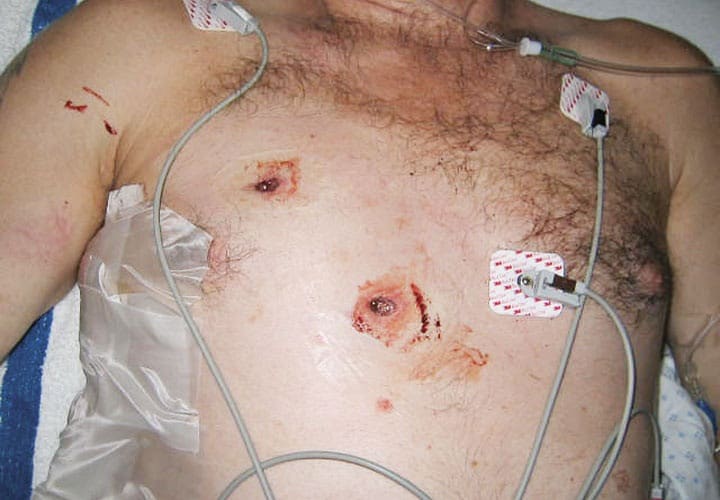 This man was shot with .40 S&W rounds to center mass, was not incapacitated at the scene, and survived the shooting. (Photo: Sydney Vail)

At the end of October, the FBI announced that it was planning to swap out the .40 S&W pistols and ammunition now used by its agents and replace them with 9mm pistols and ammo. This was a widely discussed decision, given that the Bureau once partially blamed the performance of 9mm cartridges for the deaths of two agents in the 1986 Miami shootout and subsequently transitioned to 10mm and then to .40 caliber sidearms. This is also a widely followed decision because the FBI’s choice of duty pistol and ammo will likely influence many other law enforcement agencies to give the 9mm jacketed hollow-point another look.

In the January 2013 issue of POLICE, I wrote an article titled “Stopping Power: Myths, Legends, and Realities,” in which I discussed the wound ballistics performance of various popular pistol calibers as I have observed through my experience as a trauma surgeon and tactical medical specialist. My advice then and now is when it comes to claims about the effectiveness of handgun ammo, don’t believe the hype. Instead, look at the hard facts.

And now that the FBI’s decision to go back to 9mm pistols has ignited another round of debate about caliber effectiveness, it’s time to look at the real-world performance of 9mm and .40 S&W rounds in terms of wound ballistics.

I believe the definition of stopping power for law enforcement should be a particular ammunition’s effectiveness to render a person unable to offer resistance or remain a threat to the officer, an intended victim, or self.

So how does ammunition accomplish this? You have two options. You can use a really large round at very high velocity like the 30mm cannon rounds from an Apache helicopter’s M230 Chain Gun, which produces substantial kinetic energy, or you can place your shot where it has the most effect. Obviously, shot placement is the only realistic option for a law enforcement officer.

A handgun bullet shot into the shirtless torso of a person causes a degree of injury due to the body absorbing the bullet’s energy and dispersing it in front of and around the path of the bullet. The projectile also tears through the tissue. This means that the kinetic energy of the bullet will create both a permanent cavity and to a much lesser extent a temporary cavity.

But handgun ammunition only has acceptable stopping power if the bullet hits a vital structure that would “stop” the target from continuing the fight.

OK, let’s return to our specific discussion of 9mm and .40 S&W ammo and look at some of the basic measurable differences between these two calibers of handgun rounds.

There is no debate that for a handgun round to be as effective at incapacitating as quickly as possible, it has to either hit the brain stem, injure a significant amount of brain tissue, or cause extremely rapid exsanguination (hemorrhage). From a wound ballistics perspective, the diameter of the handgun bullet translates into the permanent cavity, the direct tissue impact or what is actually injured by the projectile as it passes through tissues. If there is a blood vessel that is injured, the larger the hole or injury relates to the volume of blood that is able to leave the vascular system in a period of time as to cause a significant enough loss of blood to make the blood pressure go down to cause the brain not to work as efficiently, then to cause the loss of coordination, which then causes the person to become a reduced threat and eventually lose consciousness…all over time.

In a head shot, the amount of brain tissue disrupted by a bullet produces varying degrees of incapacitation unless the brain stem is hit. So when comparing the 9mm to the .40 S&W, size is not a huge factor. If both expand to the maximum diameter based on bullet design, there is not a large enough difference to account for a larger degree of tissue injury; the difference between non-expanded bullets is small as well.

Penetration in living tissue is a guessing game for both of these rounds. Despite what many shooters believe, measuring penetration in ballistic gel—simulating muscle tissue—yields limited useful information about penetration in the human body, which is made up of more than just muscle.

There are too many variables to accurately predict what the actual depth of penetration will be inside a human body. I have found a wide variety of depths of penetration for both 9mm and .40 caliber rounds when operating or caring for gunshot patients.

More Rounds in the Mag

Our discussion now comes back to shot placement or wounding accuracy and the potential number of bullets required to increase or maximize the odds of injuring the body of a threat in such a way as to render that person incapacitated.

Shooting accuracy is affected by stress, but the effects of stress can be reduced through experience. To quote Bruce Siddle from “Sharpening the Warriors Edge,” “stress is a matter of perception and perceptions can be changed through the training process.” By training to deal with more stressful situations, and not training until you get it right but training so you don’t get it wrong, you have a much better chance of accurate hits under stressful conditions.

In other words, shot placement—which is critical to prevailing in a gunfight—must be maintained under the most stressful of circumstances. Having more rounds in your pistol’s magazine increases the potential for accurate shots. Hence the FBI chose to make the change to the 9mm round, which usually offers a higher round count per magazine, faster and more accurate follow-up shots, less perceived recoil, and very similar physical bullet characteristics to the .40 S&W.

From a trauma surgeon’s perspective, both the 9mm and the .40 caliber can wound, injure, incapacitate, or kill. However, shot placement is the best predictor of accomplishing the intended goals. I have treated patients with more than 20 “holes” in them that never caused enough tissue damage or bleeding to cause them to die. And I have treated patients with a single “hole” that did die. Remember, the discussion is the ability of a particular ammunition caliber with improved bullet characteristics to stop a threat, not living or dying but simply to temporarily or permanently incapacitate the threat.

The FBI report of an officer-involved shooting on Nov. 29, 2006, from a Pennsylvania police department makes for an interesting read on this topic. The assailant was shot in the chest and abdomen with 180-grain

.40 S&W modern hollow-point ammunition as well as .223 rounds from an M4. On autopsy it was discovered he had been shot 17 times with 11 rounds exiting his body. Despite these many wounds, he struggled with officers attempting to handcuff him before he died.

There are people who will read this article who will maintain that the early works of Dr. Martin Fackler were written in stone when in fact he provided a significant amount of quality wound ballistics data but kept an open mind, understanding the limitations of simulants such as ballistic gel. This is best represented in an editorial he wrote about an article published in the Journal of the International Wound Ballistics Association, Winter volume 1991;10-13, by E.J. Wolberg.

The article in question was an autopsy study by a medical examiner on “torso only” shots with a retained bullet, noting that patients were excluded if bone was hit or there was over penetration. This data was compared to gelatin data for the 9mm 147-grain Winchester jacketed hollow-point. Gel demonstrated a 12- to 14-inch depth of penetration, and the autopsy findings (with the bullet only passing through soft tissue) of a 10- to 17-inch penetration. The author’s conclusion: “Based on comparison of data from living tissue penetration by the 9mm 147-grain bullet with test shots of the same bullet into gelatin, it is concluded that gelatin can be a useful predictor of this bullet’s penetration and expansion characteristics in shots in the human torso.”

Dr. Fackler’s editorial comment to this statement and study: “What Gene Wolberg has done here is what every clear thinking LE agency should be doing. Skepticism and meaningful comparison are the essence of common sense and all scientific thought….Don’t believe that your tissue simulant is a good predictor just because some army lab or the FBI uses it and says so—check it out for yourself.”

The obvious flaws in this study related to a gel-to-autopsy comparison was that if a bullet hit bone, it would invalidate the gel comparison; gel is a soft tissue simulant only. Also excluded were the outcomes of all victims; did they live, die immediately, or die later?

So when the FBI decided to change from the .40 to 9mm, it was likely done with significant testing, evaluation, consideration of actual wounds with degrees of injury sustained, degree of training needed to maintain accuracy of shot placement, as well as many other factors not yet available to the public.

Think of yourself under a stressful set of conditions using a weapon platform and ammunition that maximized your skill set and training; limited your recoil and made for faster, more accurate follow-up shots; and gave you higher magazine capacity so that you could minimize the chances of needing to do a physical manipulation to perform a tactical reload in the attempts to stop a threat.

The facts are clear; not every bullet entering a body will stop a threat. Major bleeding takes time, and the time to incapacitation is unpredictable unless the brainstem is hit or the heart is destroyed, and even then the person has 10 to 15 seconds of life left. More injuries to more structures gives an improved potential of incapacitation, and when they are accurate shots, the results are more predicted to have the intended outcome.

Sydney Vail, M.D., FACS, is chief of the division of trauma surgery and surgical critical care and director of the tactical medicine program at the Maricopa Medical Center in Phoenix. He is also medical director of Tactical Trauma Immediate Response (Tac-TIR) Group, Cowtown, Peoria, AZ; director of the SWAT Tactical Medical Program for Arizona DPS; and a senior instructor for the International School of Tactical Medicine.