How do you camp without tent poles?

How do you camp without tent poles?

Last min booking lead to 12+ hours in airports on 3 different planes. Add to that 6 hours sleep over past 48 hours and you are bound to forget something. Yes, I am setting up the largest excuse for for packing and Yes, you can slam me in the comments below….

The ridiculously beautiful view while hiking.

8 of us traveled and hiked from all over the country to camp in a beautiful location in the mountains of Idaho. The purpose? Besides have a ton of fun and train? We wanted to test out all the skills we learned from the filming of the Survival Skills DVD in partnership with Sigma3 Survival School. We acquired so many useful techniques, tips and tricks, wet socks, and cold hands that we needed to practice and put them to the test. Primitive survival camping trip was planned. 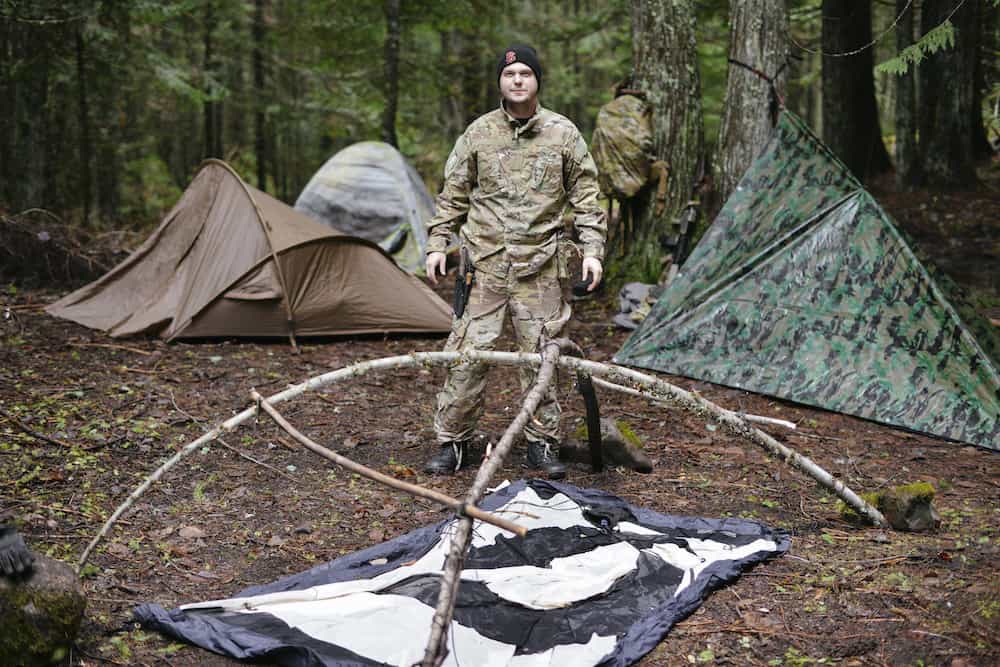 Got the rocks in place and it “feels” very sturdy, only time will tell.

80lbs of equipment and sore body later we arrived at our spot in the woods. Everything in Idaho this trip was wet. If you put a piece of paper outside it was soggy in a matter of minutes. You should have seen our targets! Back to the story, we find our spot and start setting up camp. Everything is going as planned as I roll my tent out on the ground and unfold it. Until, that is, I reach for where my tent poles should be in my pack. Third and forth inspection turned up the same odd result, no tent poles. Embarrassment sets in and there is no way to play off forgetting your tent poles, no way to fake it. I start running through the options: 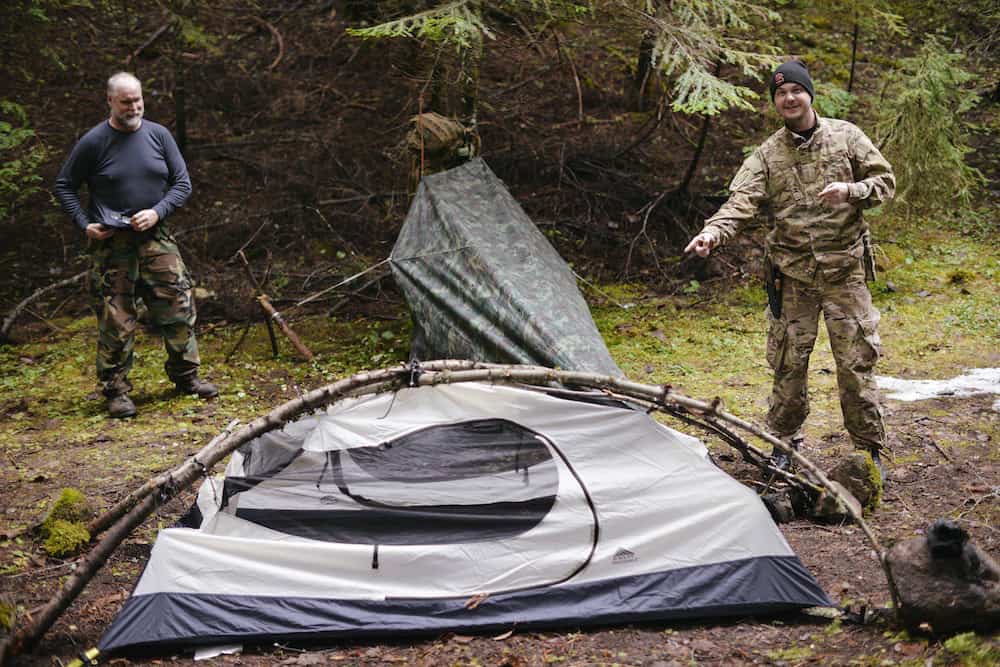 I hope that is a look of admiration on Brad’s face. I’m just shocked it worked!

I’m now committed to making tent poles for my small 2 person tent. First thing, I searched around for about 20 minutes to find two long and recently fallen trees that were about the length and curvature of my old tent poles. I tied them in the middle so they formed a funky looking “X” but that promptly fell over. This is the first time I truly felt like an idiot, I have no idea what I am doing, it’s the first time I’ve made anything out of wood, I’m trying knots and techniques I recently learned, and everyone has given me the “good luck with that one” look. For my next step I added two cross beams to hold the structure upright. This seemed to give me a semi-solid form. It’s crazy wobbly and will fall over if a squirrel decides to use it as a play ground. My tent used stakes to give it additional stability on the ground which I did not have but using that principle I loosened the dirt where my fashioned tent poles met the ground and then drove them as deep into the soil I could. This helped a little but I needed something more. Luckily where we were there were tons of rocks so I piled those all around where my “tent poles” met the earth. After all this my new tent poles are remarkably solid and barely move when pressed against. Time for the rest of the tent! Main tent is hung from underneath and the rain fly is draped over the top. I carved some small branches into stakes to hold the tent corners in place. That was it, I stayed in that tent for two nights and it lasted through rain just fine. Rain! I almost forgot, I added cedar bows to the sides to reduce wind flow through my tent and prevent splash back from the rain. 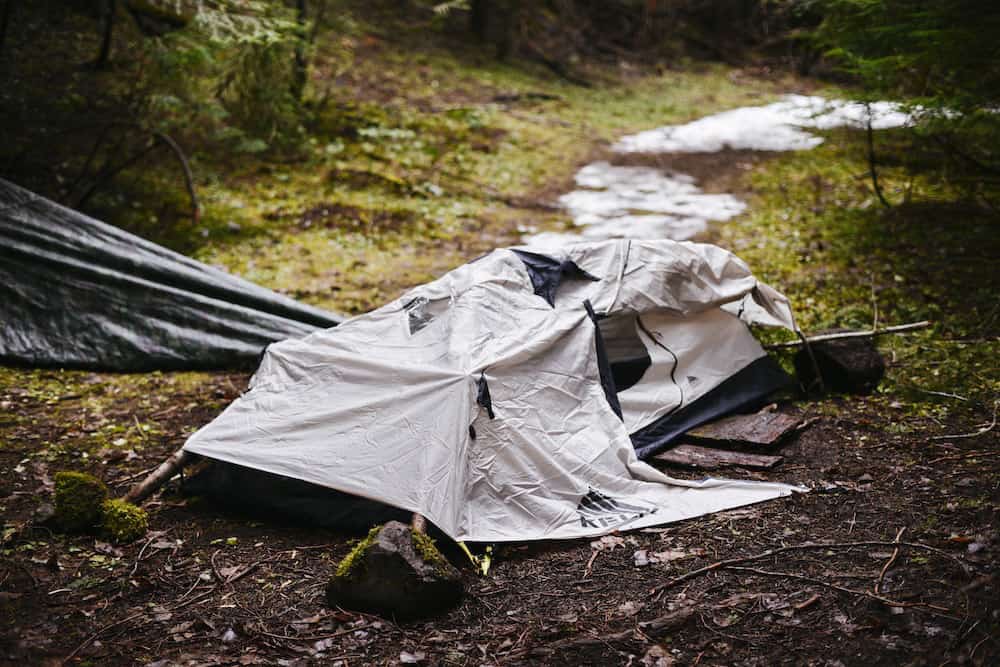 Not as pretty with the rain fly on and it did collect water during the rain storm.

It worked great, albeit, I had less headroom than normal but I did not have to sacrifice my pride and I now know that if something were to happen in far more remote areas of this world that I could construct something that could save my life. Best part, Dave and his family took a hike to our camping spot and my tent poles were still up and just as stable. A handicapped G.I. Joe has even taken it as temporary lodging. 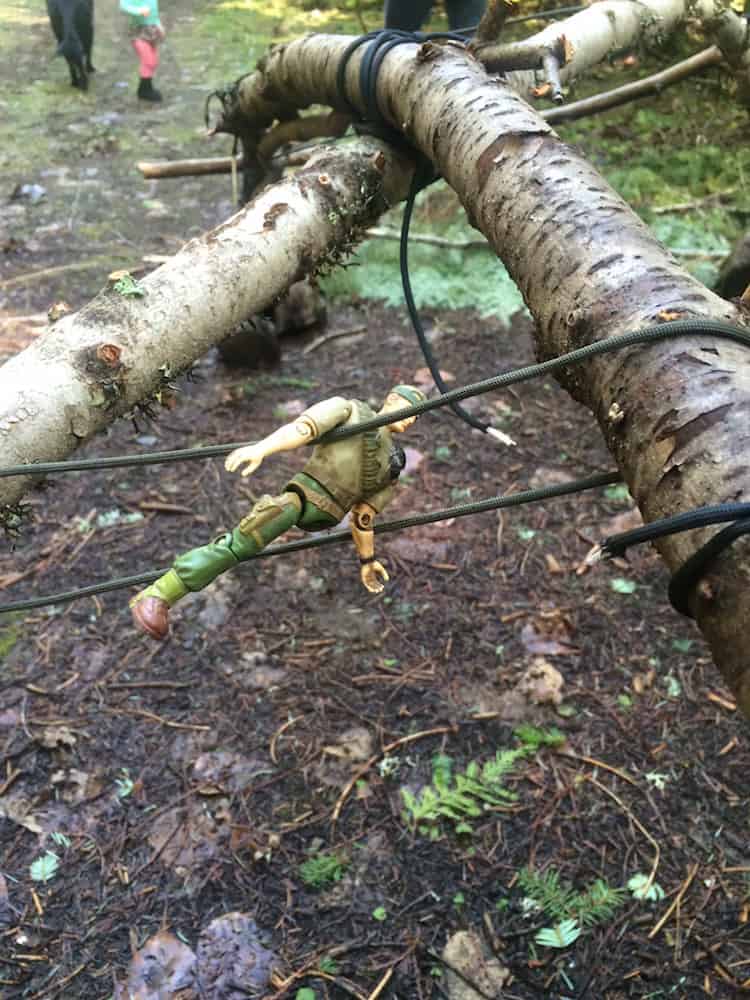 4 thoughts on “How do you camp without tent poles?”